GET MAD!
The Life and Times of a Mad Woman
By Victoria Dunford, BEM

GET MAD! is a book to mark the 5-year anniversary of MAD-Aid, the organization based on Isle of Wight that has transformed the lives of thousands of people in Moldova, Romania, Belarus, Bulgaria, and Africa. Victoria Dunford, founder of the charity, wrote her memoir to inspire other people around the globe to do the same.

The launch of the book coincides with the anniversary event, a charity ball Once Upon a Time, on 14th of October 2017 on Isle of Wight, Great Britain.

Once Upon a Time event brought together 70 guests, of whom over 40 were Moldovan born living in all parts of Great Britain.

The event was sponsored by Taxace LTD and Ocavia Limited, companies managed by Moldova-born Iurie Bivol, who also is a trustee of MAD-Ai. Another sponsor to whome we thankfull are PC Consultants and Mermaid Services IOW.

The guests were impressed by our performers Iurie Sula, Ecaterina Cîrlan, Rhys Morris, Elena Sava, Robert Tollow. The anniversary cake was made by Olga Ursu, and the room decorated by Vio Silistra.

Special thanks also to Cwu Humanitarian Aid members who took part in the event. Julie Dowd is the one who managed to raise so much with the auction, including selling Victoria’s “Get MAD!” book.

The event raised around £2500 that will be used for Phoenix Centre, the centre for children with special needs in the north of Moldova.

The first “Get Mad!” book sold for £250 in an auction battle between Vadim Turcanu and Vilen Murzac, Vadim won and donated the book to the Embassy of the Republic of Moldova in London. 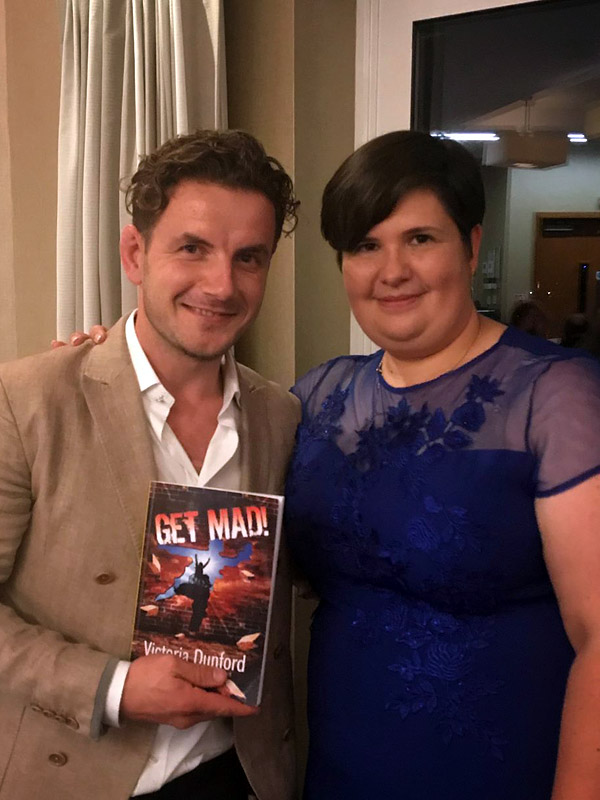 “GET MAD!” is about how Victoria went mad about injustice, mad about poverty, mad about education and transformation. As a great believer that change starts with every single one of us, she got up, brushed off her insecurities, stopped her whining, and converted her MAD to Making A Difference!

Within just five years, Victoria managed to break barriers, push stereotypes aside, and prove that life is in our hands; we can be the change we want in the world. Despite thousands of bureaucratic obstacles and challenges, she carried on, built a door every time she hit a brick wall, and put humanity ahead of everything.

“’Working in Moldova, the ex-Soviet country, is going to be impossible,’ was the common refrain I heard. I will just try and see for myself.”

Phil Batson, the former British Ambassador to Moldova said in his forward: “Victoria has turned on its head the notion that individuals cannot deliver positive change against the weight of the authorities and social stigmas.”

Is she stopping here? Of course not.
Were the government hurdles deal breakers? Not if you don’t let them.

Read her story. You will see that you can do the same, and learn step-by-step how to do it.

All the proceeds from the book will go to support MAD-Aid programs.